In 2006, Graham Meriwether was helping out on his friend's farm when he read Michael Pollan's The Omnivore's Dilemma. Inspiration struck, and inspiration stuck.

Graham set out to make a documentary film, which became American Meat. Joel Salatin, a third-generation alternative farmer in Virginia's Shenandoah Valley featured in Pollan's book, became the film's star. American Meat is takes a look at chicken, hog and cattle production in America through the eyes of farmers. It contrasts industrial feedlots with Joel Salatin's Polyface Farms, a model where rotational grazing and local distribution give hope that a different, more humane and environmentally conscious way to farm may indeed save the day…and our future.

Graham didn't just create a film; he built a production company, Leave It Better. Leave It Better is committed to telling stories about environmental challenges, and proposing real solutions to these challenges. "This is a film about a movement in agriculture, so we wanted to bring it to agricultural communities first,” Graham says. They used a grassroots distribution, showing the movie first in FFA's and colleges in Iowa. "We rolled out a grass carpet."

American Meat was powerful in its ability to ignite "constructive conversations about the future of agriculture--not negativity or anger." Leave It Better is developing its next film, Farmers for America. The average age of farmers in the USA is above 55, and Graham sees it as his personal mission to "inspire and support the next generation of farmers." "What excites me most," Graham says, "is having a tangible impact on what the next generations of farmers will do."

In 2010, Meriwether founded the non-profit organization, Leave It Better Foundation, whose mission is to empower youth to make the Earth a better place. Applegate is proud to support Leave It Better Foundation, and the exciting, important work that they do. "Kids hold the key to positive environmental change," Graham says. The Leave It Better Foundation teaches students how to grow food, and empowers them to share their knowledge through video storytelling. They have helped build 10 gardens in New York City schools, and taught over 2,000 students compost, plant and harvest through their own community garden in the Bronx. They even distribute cameras to schools so students can document their journeys.

"Every day, I learn something new. This work has made a profound impact on the choices I make," Graham says. "This has been a life-changing journey."

Do you know a Changemaker who has made a positive difference in the local food community? Submit a nomination for his or her chance to win a $1,000 grant for the non-profit of his or her choosing at www.applegate.com/changemakers today! 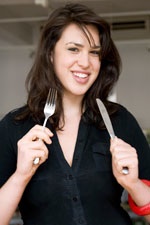 Hannah Howard is a food writer who spent her formative years eating, drinking, serving, bartending, hostessing, cooking and managing restaurants. She now writes about delicious things for a living.