When the reality of the coronavirus hit home in March, Americans rushed to the grocery store. They bought toilet paper and flour, meat and canned fruits and vegetables. But just as revealing as what they did buy was what they didn’t. Even when the store shelves were at their most empty, it was still pretty easy to get a plant-based burger.

Let me be clear. I am not gloating. Now more than ever, it is essential that Americans come together and find smart, practical solutions to the issues we face as a nation. Today that means beating back the coronavirus, stabilizing the economy, getting our kids back to school. But when this is over—and yes, this too shall pass—our previous worries will resurface. And what meat, and how often we eat it, is one of them.

As the panic shopping showed, people love meat. It’s biological and a natural and essential part of being human. Without meat, studies show, our brains would not have developed sufficiently to evolve into the verbal intelligent humans we are today. And yet, until the coronavirus hit, all the buzz in the meat industry was about how to replace it: With highly processed soy burgers that “really bleed” or meat grown in a petri dish or, that age-old solution, tofu.

The kneejerk urge to “cancel” meat is, I suppose, understandable. Meat production does pose real challenges to the environment and, in excess, our health. According to the UN Food and Agriculture Organization, livestock production is a significant contributor to climate change, accounting for about 14 percent of greenhouse gas emissions. A widely publicized (and later widely criticized) study last year warned that the consumption of even small amounts of processed meats could lead to early death. With Silicon Valley investment firms pouring billions into companies such as Beyond Meat and Impossible Foods, a lot of consumers are wondering if plant-based meat indeed is the only way to have their meat and eat it too.

It’s not. As always, there is no silver bullet to fix real, complex problems. We need bold and, frankly more natural, strategies to address both the environmental consequences of meat production and consumer behavior. My company, Applegate, is betting the farm that there is a third, meat-lovers’ way to “solve” meat.

To that end, Applegate is relentlessly pursuing smarter ways to produce meat with a light—even a positive—environmental footprint. How? For one, we are doubling down on our commitment to organic production, which among other things can reduce animals’ and humans’ exposure to pesticides and increase biodiversity in the fields the crops animals eat are grown. This means that for all of our new products, we are creating an organic version first. We also have expanded our distribution of organic meats beyond the natural and organic sector to mainstream grocery stores such as Kroger, Walmart and Target to give more people access to organic meat.

Applegate is also investing in a new kind of livestock production: holistic pasture management. Here’s how it works: When animals graze, they feed on plants, which release their carbon-rich roots into the soil. The animals also trample the ground, creating pockets for water to pool, and fertilize it with their excrement. And so as animals move from pasture to pasture, they enrich the soil, help improve water retention and boost biodiversity. Most exciting, well-managed grazing land has been shown to help sequester carbon, a key step in turning the tide on climate change.

To date, however, it has only been very small farmers who have embraced these regenerative systems, and they’ve had to sell their meat at high prices to make it worth their while. Our new sub-brand, The New Food Collective™ brand, is designed to help regenerative farmers scale up, making them more profitable and bringing prices down for consumers.

Finally, and perhaps most importantly, we are working hard to shift consumer behavior—no easy thing. For all the talk about plant-based meats, very few Americans actually eat enough plants: Only one in 10 Americans eat the recommended servings of fruits and vegetables. Meanwhile, America’s meat consumption has risen every year since 2015, hitting 220 pounds annually in 2018, according to the U.S. Department of Agriculture. It may seem crazy for the president of a meat company to say this, but we want America to eat its vegetables. And highly processed genetically modified soy does not count as a vegetable.

Our newest product line, the Well Carved™ brand, is a portfolio of burgers and meatballs made with between 35 and 40 percent organic vegetables. Our organic, grass-fed beef burger, for example, includes chunks of cauliflower, lentils, spinach and butternut squash. It also has fewer calories, and less fat and saturated fat than a conventional burger—plus it produces 51 percent fewer greenhouse-gas emission.

The idea behind these blend products is to give consumers the meat they clearly crave, while, at the same time offering a convenient way to lower their carbon footprint and reduce their overall meat consumption. It’s clean, real food and, if I do say so, a simpler and more elegant solution than switching to highly processed soy burgers or meat grown in a lab.

And here’s the thing. We know this can work because we’ve done it before. When Applegate launched in 1987, no one was curing meat without synthetic nitrites and nitrates or talking about animal-welfare standards. And there was virtually no processed meat raised without antibiotics. Now it’s more than a $3 billion category that grew 7 percent in the last year.

It’s time to get real. At Applegate, we’re ready to have a meaty, messy conversation about how to keep meat on the table, where it belongs. 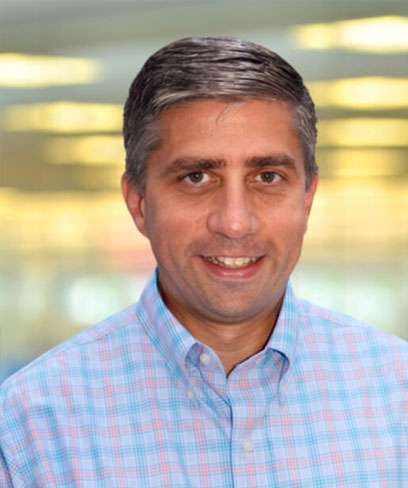 John Ghingo is the President of Applegate and responsible for driving the brand’s mission- Changing The Meat We Eat® - forward. Passionate about the natural and organic food space, he leads and inspires the Applegate team to create cleaner, crave-able food, improve animal welfare standards, and help restore the food system.