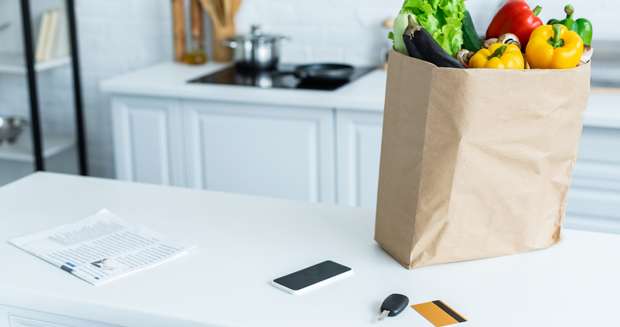 Now that we've talked about how to identify meat and poultry products raised without antibiotics, it's time to get real. Antibiotic free food costs more. Organic food (and choosing organic is one of the best ways to make sure your food is actually antibiotic free) costs more. And when you're at the supermarket, sometimes it's hard to justify spending the extra money when a conventional product looks exactly the same as an organic one. So today I want to talk about why it's important to keep choosing those products that, on the surface, cost more. I also want to talk about the real cost of food, and why those organic prices might not actually add up to paying all that much more in the long run.

How can it cost more to make food with less additives?
Seriously! It's pretty crazy that food raised without antibiotics, hormones and chemical pesticides and fertilizers is priced higher on the supermarket shelf than food raised with those additives. Shouldn't food that contains less cost less? But organic food prices reflect the true cost of raising food, and the actual cost of a food product is often not the price for which it is sold. Here are a few reasons why:

• Subsidies: Industrial farms are often given subsidies, which artificially lower the cost of their products. For example, in 2008, $7.5 billion went to industrial farm subsidies, while only $15 million went to support smaller local and organic farms. Subsidizing certain farms and certain products allows the food companies that sell those products to price them lower than their organic counterparts -- so in many cases it's not that organic foods are over-priced, but that conventional foods are under-priced.

• Production Costs and Scale: Production costs of organic food are higher because farmers generally need more time and space to raise their products, and often require more manual labor. Livestock raised without antibiotics, for example, cannot be raised in the same overcrowded conditions as livestock that are routinely fed antibiotics. Livestock that aren't administered antibiotics to promote growth also take longer to mature. And organic feed costs anywhere from $130 to $180 more per ton than non-organic feed. The result is healthier animals, healthier farm workers and healthier consumers -- but also that it takes more time, space, and work to create the same amount of food as larger industrial farms.

How much more does antibiotic free food actually cost?
Maybe not as much as we think. The National Academy of Sciences conducted a study that estimated that banning the non-therapeutic use of antibiotics in livestock production would cost consumers a total of $1.2 billion to $2.5 billion a year -- which means an increase of between $4.85 to $9.72 a year for the average consumer.

These costs are even lower when we consider the costs on society that go unaccounted for in the price of food from industrial farms. Conventional food prices may be lower, but the health and environmental effects of these industrial food systems come with a high price. In addition to clean-up costs from polluted water and pesticide run off, consider this: the Alliance for the Prudent Use of Antibiotics has estimated that antibiotic resistant bacteria generate between $16.6 billion to $26 billion per year in extra costs to the United States health care system -- way more than the cost to consumers of banning non-therapeutic antibiotic use in industrial farming.

"So What Does Vote with Your Dollars Mean?"
It means that the more consumers make purchases that reflect their values, the more the food system will begin to adopt those values. Simply put, the more we demand organic and antibiotic free products, the more farmers will see an incentive to producing those products. And the more available those products become, the less they will cost. "Voting" with your dollars helps keep us healthier and helps support farmers that are raising organic and antibiotic free food.

But unfortunately just voting with your dollars isn't enough to create changes we need. That's why we're Citizens Against Superbugs, and not just Consumers Against Superbugs. So my last blog post tomorrow is about taking action and being engaged -- and how you can help create the changes needed in our food system.